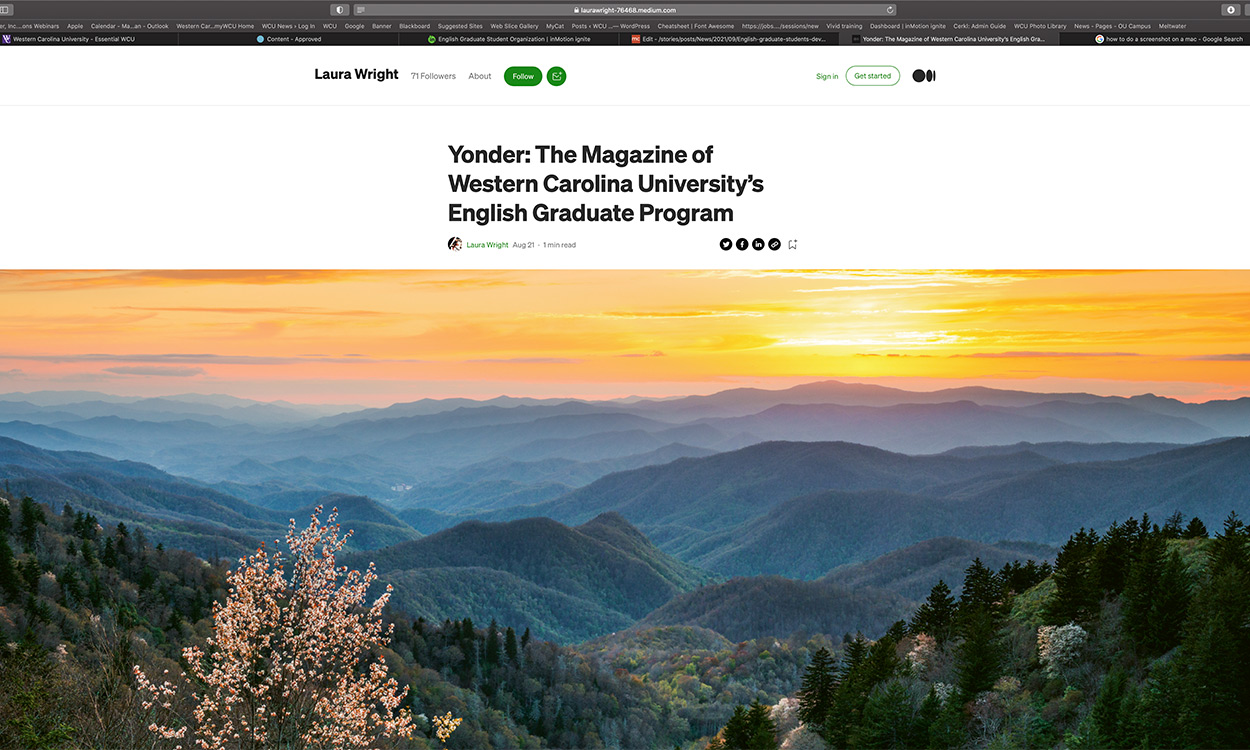 Western Carolina University English graduate students now have another opportunity to publish their written work, thanks to the vision of one of their own.

StÃ©phanie Cook, who is in the second year of a master’s degree in English, literature concentration, created â€œThe lowÂ», An online literary magazine published on Medium, with the help of Laura Wright, professor of English at WCU and director of graduate studies.

Cook, who also started the English Graduate Students Organization, discovered the void for students seeking an advanced English degree when she looked for opportunities for herself and her peers to publish their work.

â€œInitially, I wanted to participate in the writing competition that is held every year in conjunction with the Spring Literary Festival, but I found it was only for undergraduates,â€ Cook said. â€œI then contacted ‘The Nomad’ to work on this post, but was again told it was for undergraduates. It became clear to me that we needed a way for our English graduate students to display their work at WCU.

It is important for graduate students of English to have their work published for several reasons, Cook said. This gives them the ability to peer review and edit submissions and for student writers to get a “valuable line item” to their resumes, she said.

Cook, who is president of EGSO, said she created the organization to help reach graduate students socially, academically and through professional development support. There are currently 30 students in the graduate program in English, up from the past two years.

â€œDue to the pandemic, we realized that graduate students did not have the peer support that is so helpful during an intensive program like the Masters degree in English,â€ she said. â€œOne of the goals of graduate student professional development support was to find a place where students could publish and display their written program work in a low-stakes way. ”

Cook spent the past summer working as an assistant at the Graduate School, researching the benefits of a graduate-led publication on the WCU campus. Through this research, she said, it was clear that graduate students would gain valuable experience. â€œMany students will continue to publish their work in other places, and Yonder provides a first stepping stone to get there,â€ she said.

Last spring, Cook called for applications for creative and academic work to all current, former and incoming English graduate students. She received 12. EGSO agents Emma Hamilton and Meghan Harrison are co-editors and have spent the summer working with Wright on the last 10 submissions for publication.

â€œI think anyone who wanted their work published there,â€ Wright said. â€œI think there is a very good mix. There is a poem, some short stories and some essays of a more scholarly nature.

Cook is expected to graduate in May 2022, she believes her EGSO team is well positioned to maintain the publication. “They are working hard to try to create an online publication produced entirely by graduate students, with the long term goal of creating a print version as well.”