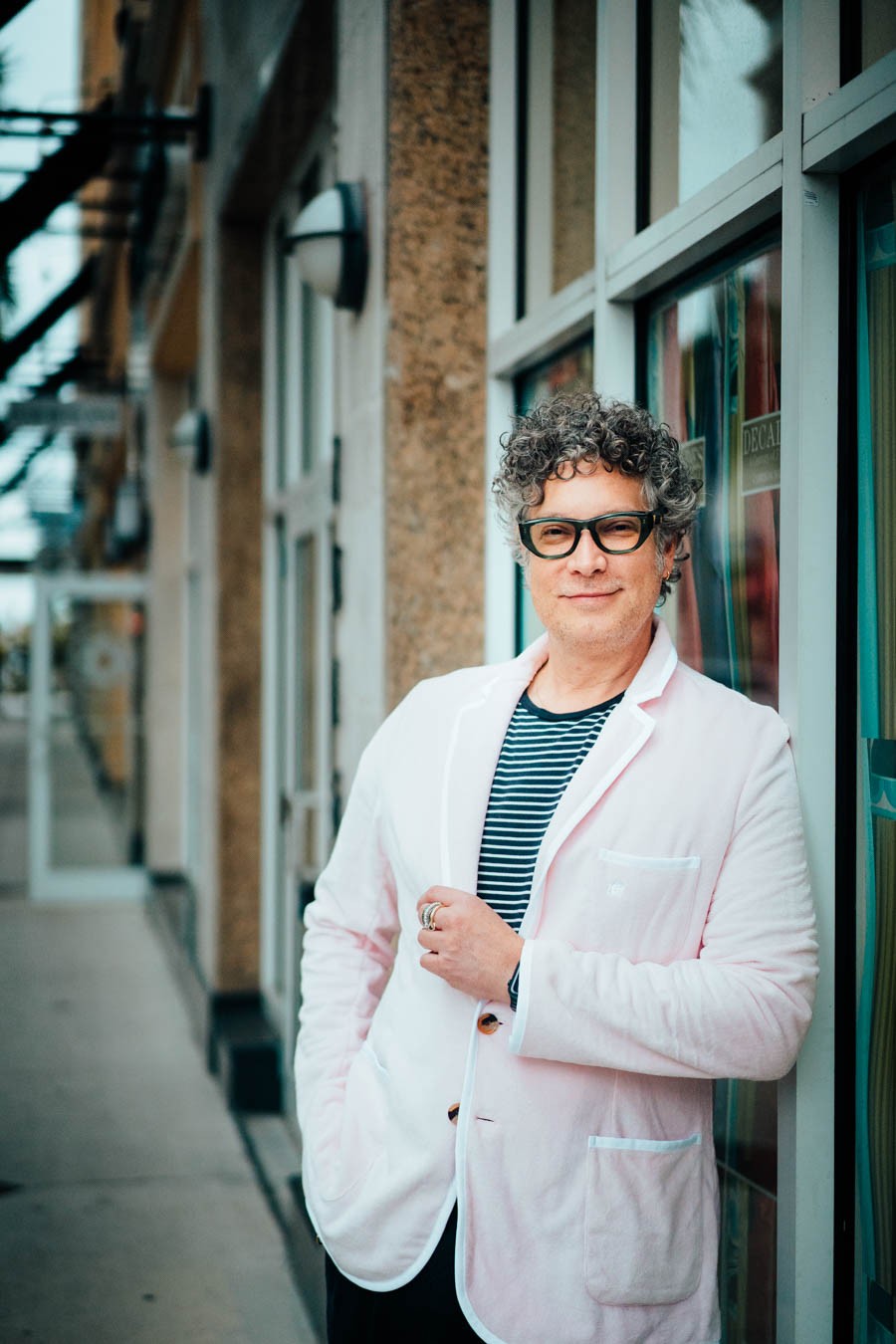 Sewing and conversation with Cameron Silver of Decades.

The T.Georgiano boutique hosted an afternoon of conversation and vintage fashion with Cameron Silver, founder of Decades Inc., famous vintage retail store in Los Angeles. Adored by fashionistas and collectors alike for an unparalleled collection, designer clothing and accessories date from the 1920s to today. After interviewing Silver, it became apparent that he was dubbed the “Vintage King” for good reason.

SRQ: When did you first become interested in fashion?

Cameron Silver: I’m an only child and my parents took me to see all the movies with them because it was cheaper than having a babysitter. So a lot of my previous inspiration came from movies. The creation dates back to 1977 when they took me to see Woody Allen’s Annie Hall. I fell in love with Diane Keaton’s look. It was a little masculine: fedora hat, waistcoat, loose khakis, loose ties. Very inspired by Dietrich. My parents ended up buying me a similar outfit and I wore it to Fred Segal, that kind of seminal LA store, and all the salespeople freaked out about how cute I looked. It was there that I first realized the power of fashion and self-expression.

SRQ: What prompted you to open Decades (27 years old, 1997)? Did you always know you wanted to own a boutique? If not, how did this materialize?

Silver: Decades was a total fortuitous accident. I loved playing store as a kid and worked in retail from high school through college, but first got into acting and singing because I loved theater and Broadway . I even made an album in the mid-90s that I thought I’d win a Grammy for. But even though I was good, I wasn’t that good. So I finally had to mature emotionally and be honest with myself in order to push past that dream and succeed somewhere else. From there, decades sort of happened, with no anticipation of it becoming what it is today. That’s why I tell young people that you can’t control your destiny – sometimes you have to give in to fate and chance.

SRQ: How would you describe the impact of fashion on culture?

Silver: Fashion is paramount because it is a barometer of how we have lived, live and will live. There’s a reason the most financially lucrative exhibits in museums tend to be fashion exhibits, because it’s a pretty tangible way for people to learn about history. You can watch the progression of fashion and see women’s liberation happen, the sexual revolution happen, emancipation – there is so much rich history that you can see happen through the clothes and shoes worn at the over time. And that’s why I like to say that what I do is a bit like the United Nations of fashion because it brings people together.

SRQ: You have an impressive list of accomplishments, from opening a boutique, writing a book, styling celebrities, starring on a reality TV show. Is there an achievement that you are most proud of or perhaps surprised the most?

Silver: Oh, hands down the time I was named one of Time “25 Most Influential Names and Faces in Fashion” from the magazine. Honestly, I didn’t think it was real. I got a call from this random UK number and thought, “Who in the world is pulling this elaborate joke?” But it was legit and really important because it was a time when it was hard to get attention, and I had only been in business for a few years. So very unexpected.

Cameron Silver outside the T.Georgiano store in downtown Sarasota, taken by Wyatt Kostygan

SRQ: How is working in fashion different today compared to when you started?

Silver: It’s day and night. I think the biggest difference is that things weren’t ubiquitous when I started, stores weren’t everywhere. Now everything is everywhere. I remember as a kid waiting for September’s Vogue magazine to drop in the mailbox. It was the first time you could see what was happening in fashion. Now you can go to social media and see instantly. That’s why with Decades we try to keep it more visceral and in the moment. Only a few things live online to promote that in-person shopping experience, and it’s all fleeting: either you take what you want now, or you lose it.

SRQ: What advice would you give to someone looking to grow in the fashion industry? I do a lot of mentoring with young people, which I am very passionate about. Also, I’m an only child, so I might need someone to change my diaper in about five years. So I also have my own agenda. But I tell them you have to know your mode. Read my book, go to thrift stores, check out designers, work in retail. I always say the best thing to do is work in a store because for fashion, especially fashion designers, it means nothing until you get it on someone. It’s all about matchmaking. So I think it’s important to work in a store and find out how people feel in certain clothes, what they gravitate towards and why they buy them.

SRQ: What other dreams or ambitions remain on your professional bucket list?

Silver: I’ve always wanted my own brand, that’s probably the biggest achievement I’d still like to accomplish. I’ve done a lot of collaborations, but not quite mine yet. I’ve also managed many brands, but I’ve never had a creative director position, which I would like to do. Oh, and there’s a new TV project that’s been introduced to me that I’m very excited about. It really touches on the United Nations fashion philosophy that I mentioned earlier and how, much like food, fashion brings us together. There hasn’t really been a good fashion show since. Style with Elsa Klensch 25 years ago, or Jeanne Beker doing fashion files. And it would allow me to do something with fashion, travel and culture. SRQ