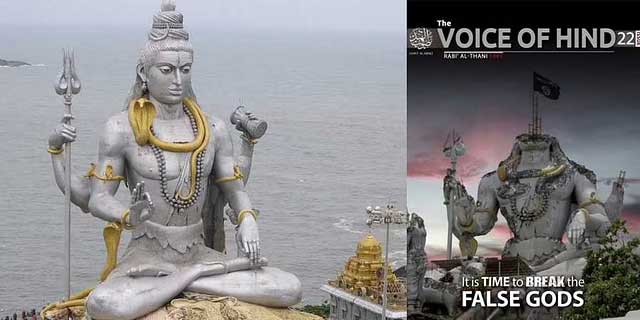 Karwar, November 23: The photo of the huge statue of Lord Shiva found at Murudeshwar, a famous tourist spot in Uttara Kannada district, was published in a post by a notorious terrorist organization. It is suspected that this could be an idea of â€‹â€‹the terrorist attack proposed on the site.

Lord Shiva’s photo in Murudeshwar has been altered to look like his skull has been cut from the statue. It was published in the publication ISIS. This photo has gone viral on social media sites. A person named Anshul Saxena posted this photo in his accounts in an attempt to get the government’s attention. The photo was published in ‘The Voice of Hind’, the spokesperson for ISIS. The image is accompanied by the phrase â€œIt’s time to break down the false godsâ€. A flag is shown floating in the area of â€‹â€‹the statue’s skull.

Even though there is no clarity that the image is official, Saxena, in her posts, urged governments to take security measures immediately. The police were unable to provide an immediate response. The population wants the service concerned to verify the veracity of the photo and other information and ensure that such vandalism aimed at desecration is not allowed.

Much Ado About Hamlet’s – SRQist :: Article from SRQ Magazine by Phil Lederer