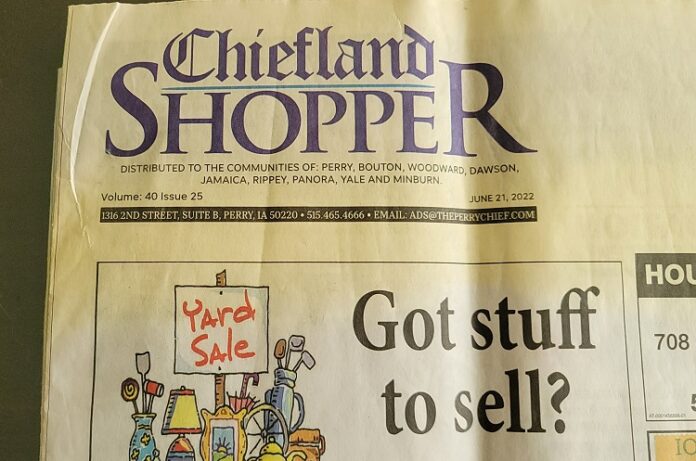 After 46 years of delivering print ads to Perry-area consumers, the ‘Chiefland Shopper’ will stop delivering to area mailboxes after this week, the latest local victim of the government’s revenue slump. impression and advertiser preference to further enrich behemoths like Facebook and Google.

A U.S. Postal Service employee in Perry confirmed that Gannett Co. Inc., which owns the “Perry Chief” and “Chiefland Shopper,” notified the USPS about a month ago that it would stop publishing at the end of June. Repeated attempts to reach a representative for Gannett on Monday were unsuccessful.

Perry has seen several of its free print publications disappear in recent years. Johnston-based ‘Perry Living’ magazine ceased publishing its free monthly edition of Perry in December 2019, and the ‘CHAT Sheet’, long a daily companion in local restaurants and cafes, was reduced to a publication bi-weekly before falling victim to COVID. -19 global pandemic in August 2020.

Perry’s Free Shopper began publishing in January 1976 as the “Quad-County Shopper”, a product of the Chief Printing Co., which also owned the “Perry Daily Chief”. The customer was renamed “Chiefland Shopper” in May 1981 and printing was moved from Wednesday to Tuesday. The “Daily Chief” became the weekly “Chief” in November 1983.

The “Chief” and his buyer sister were sold by their local owners in 2013 to a Las Vegas newspaper chain, which in turn sold the products in 2015 to GateHouse Media. The shopper’s circulation, which for many years was stable at 12,000 copies per week, was reduced to around 6,000 per week in 2016 under former publisher Lisa Widick.

GateHouse merged with Gannett in 2019 to form Gannett Co. Inc., now the largest newspaper company in the United States with more than 250 daily publications and several hundred weekly titles.