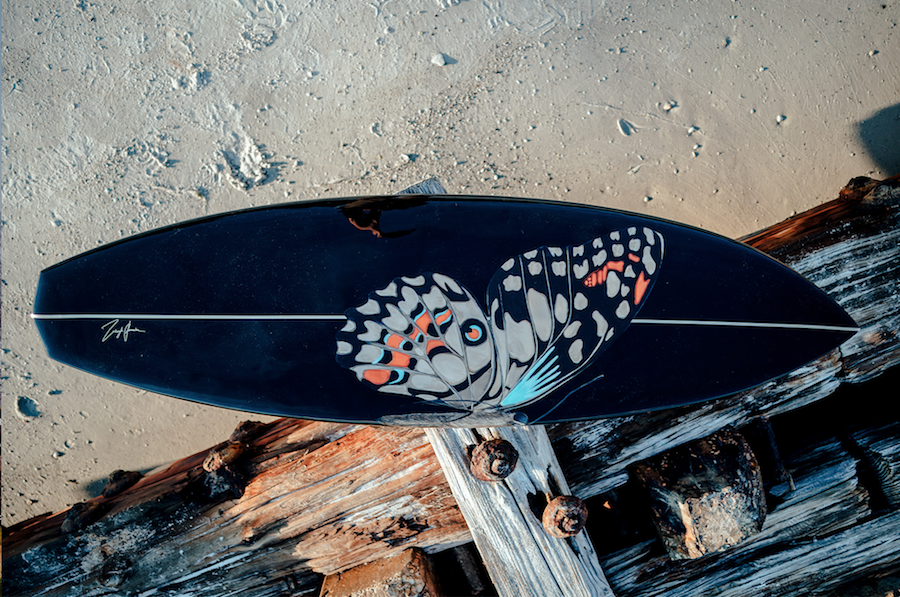 Artist and activist Dominika Zabczyk. All photographs by Wyatt Kostygan

Five sirenic surfboards make up the ‘Tribute to Nature’ series, wonderful creatures and the environment they represent: the elephant and the white tiger on the ground; The Butterfly by the sky; The Whale Shark by sea; and last, but not least, Black Marble, symbolizing the Earth and “the beauty beneath its surface, with some environmental imbalances,” explains Dominika Zabczyk, the artist behind Dominiq Art. The common thread between these animals? They all ended up on a notorious list of endangered species. Whether it’s habitat loss or degradation, overhunting and poaching, pollution and climate change, Zabczyk doesn’t care about riding the wave until these creatures are officially extinct. So she captured them, metaphorically, in oil paint on reimagined surfboards. The concept started to crystallize when she started to playfully draw on the boards. â€œI’ve always been inspired by nature and animals – their diversity, the patterns on their bodies, the vibrant colors. I knew I wanted to translate this majestic beauty and wisdom into paintings, â€she says. “The limited edition collection is a reflection on the beauty of our world and a sweet reminder that if we don’t act, entire ecosystems will collapse.” The surfboards used for Zabczyk’s paintings also had a chance of survival – saved from elimination or abandonment and a second chance to create a powerful message.

â€œI wanted boards with a soul,â€ she says. â€œI knew that for this project I needed real surfboards that are loved and loved by their human owners – stories and an energy that only used boards have. Zabczyk sourced used surfboards and repair expertise from Juan Rodriguez, a renowned and extremely talented local shaper from One World Surf Designs. Since these platforms had seen better days, it was essential to repair them before painting. “The boards were in dire need of repair and a lot of love – their surfaces still showed some dents and imperfections, but not purposely smoothed out perfectly.”

The medium was a challenge to work with, she admits, but eventually the canvas took shape so that she could overlap with her immortal subjects. After the boards were prepared with a solid black base paint, Zabczyk sketched out the outlines and then painted the rotating animals, explaining that it takes days at a time to dry between coats. â€œI would paint elephants on Monday, sharks on Tuesday, butterflies on Wednesday, and so on. Â», She explains. â€œI could watch how they slowly started to build the layers. Overall, it took me about four months to complete the series. The most difficult, she admits to be the butterfly, which needed the most pigments to achieve a solid color, giving it that 3D look but without leaving any brush marks. “I think this one was close to 20 diapers, but to be honest after 15 I stopped counting.”

Meanwhile, the silt along the body of the planks she touched up with a gold line to symbolize towing the line of harmony, balance and connection between humans and nature – an invisible link, says it, which keeps us all alive. Tribute to Nature portraits purposely show half of the animal’s face or body, for we, Zabczyk says, are the other half, and together we create a whole. Then, an epoxy resin to obtain a glossy finish and a reflection. The eyes become piercing realism, almost alive, from the shining armor. â€œWhen you look into their eyes, you will see your own reflection – a reminder that humans and animals are equal counterparts on this planet,â€ she says. â€œI get goosebumps every time I look into the elephant’s eyes and put my hand on its trunk. These animals have a special place in my heart. I painted them straight out of my soul.